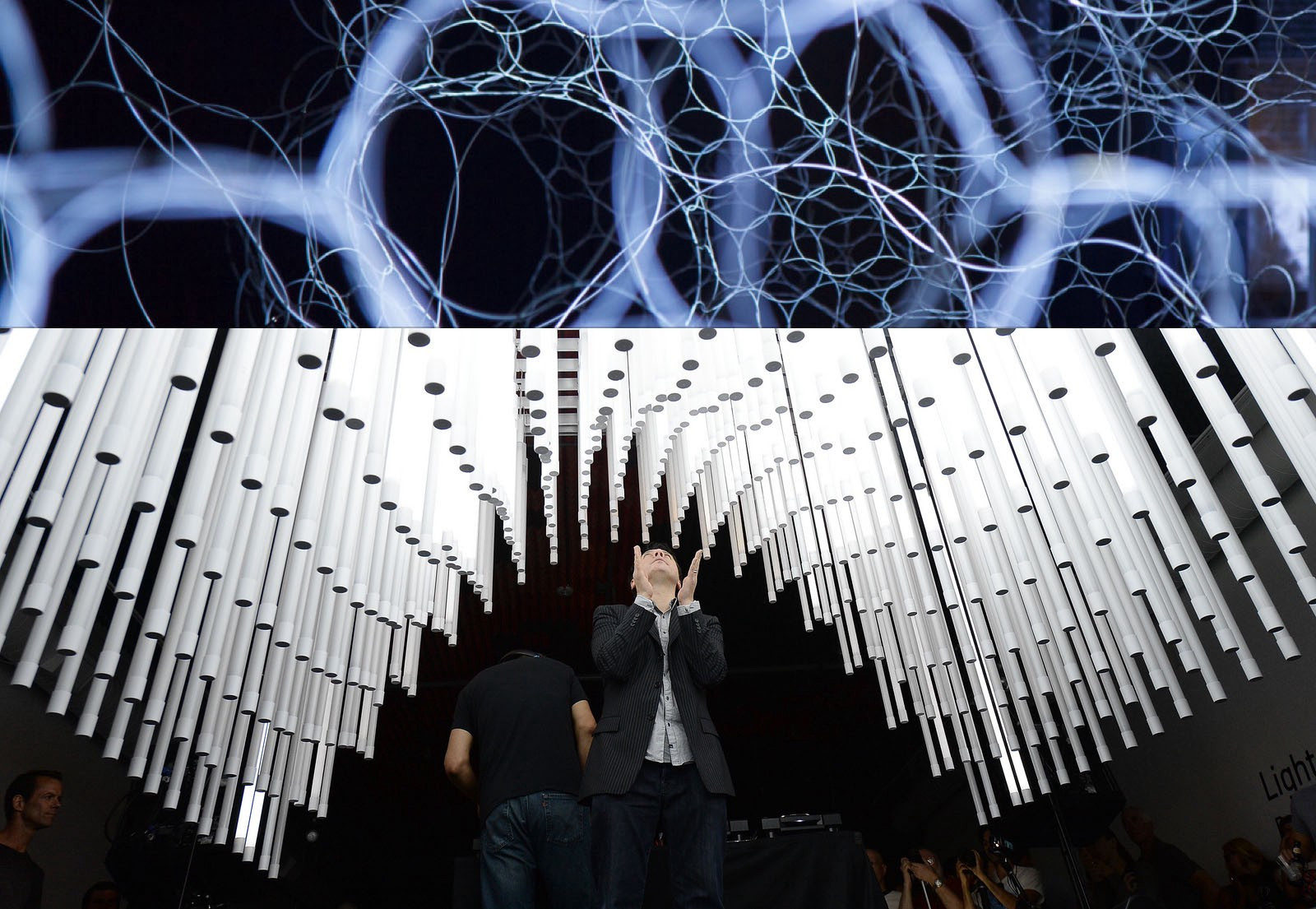 Imagine a physical and virtual stage programmed to blend music and visual arts through a set of algorithms associating titles. For instance, take ‘As Satellites Go By’ by electronic duo Lamb and blend it with ‘Satellites’, an eerie photographic journey on the fringes of the former Soviet empire, by Jonas Bendiksen.

Commissioned by Sonos, Light House is an interactive light and sound responsive installation created by NY’s SoftLab that responds in real-time to Sonos components
Imagine this arbitrary focal point to become the shuffle system of an evening, building stage momentum with an audience invited to curate/vet/reject each matching, or enrich it with new references, through a mobile app device.

Imagine how easy it would be to build ephemeral intangible masterpieces of momentums with a Tinder-like technology — changing not just individual behaviours in mating, but ways to collectively interact through shared decision-making (live matching), orchestrated by a constellation of individuals building togetherness as a point of convergence.

Dream for some, nightmare for others? No longer. We finally live in an era of making. Beyond irony. The experimentation just begins.

Our epoch of information technologies has helped built two-level conversations and low-key hierarchy through digital connectedness and social media fluidity. It has expanded the rays of friendship and personal expression. It has set improbable encounters up and allowed mass protests to ripple from metropolis to metropolis in the speed of light.

When a raging Prince left Warner Bros. in 1992, who would have thought such bastions of authority would show so many cracks two decades later? Prince rejoined this year (even louder), and since, journalism has become collaborative and citizen-driven, governments have been exposed and taken to account in endless scandals — ‘whistleblowing is now an essential art’, and in the mist of the chaos, visual arts stealthily evaded the sultry cult centres of elitism.

The wealth and variety of voices (and content) in the digital sphere have since generated a new disaster and dilemma coined ‘data deluge’. In reality, among the text-based information deluge — in its growing interstices, we are experiencing the best ever authored documentary and fictional works, ranging from animated films to experimental interactive platforms and performance videos.

This is why Convergence 2015 is where music, art, and technology will blend smoothly, pulverising all restrictive borders left between each practice.

To avoid the risk of ‘data deluge’ while exploring, Convergence’s guest artists will be the curators! They’ll be setting refined playlists — both in music and visual arts, for the audience to then be enriched by its own participation.

If music and visual arts shared at time tense relationship, the reasons to perpetuate the myth of exclusion (or seclusion) have eroded. Technologies helped polish the remaining asperities.

Music, art, and interactive technology in their creative process and production workflow use more and more a common set of tools. Bridging practice with software has enabled artists and makers to move with agility between music, sculpture, photography, dance, architecture, design and film.

When instruments ‘speak’ to each other, disciplines and creative ‘languages’ interlace; conductors build ambitious symphonies with sound and visuals, and sensorial experiences expand.

As a sign of the times, year 2014 marks a clear shift within museums and art centres towards video art and digitally based installations. It was at least true in Paris with Bill Viola at The Grand Palais in March, Oscar Muñoz at the Jeu de Paume in July, and Ed Atkins’s ‘Bastards’ at the Palais de Tokyo. It was the case in London with the Digital Revolution at Barbican (September). And November marks Tate Modern and Africa Express’s “first fully-interactive documentary film” using the interactive video platform interlude.fm.

While the scope of visual arts is now expanding drastically with major advances in 3D printing and computer-generated imagery, art collectives, art magazines, as well as creative agencies pop up in the digital sphere, promising its curatorial future while generating new forms of self-expressions.

Nowness, Self Publish Be Happy, Cargo Collective, Storehouse, WeFolk are the new lighthouses for visual arts, although so much more is needed for the ‘creative conversation’ to fully arise. In music bridging with visuals, Software such as Processing and Max/MSP enable artists and musicians to present coherent audiovisual works with interaction between audio, video, graphics and control data. Convergence bridging scientific and creative disciplines will be seeding new types of collaborations, and that is the most promising vision of the future.

Convergence is interaction: when street artists play Spiderman climbing endlessly (and still illegally) along blind facades to ‘talk’ to each other using encrypted signatures… When sound installations are commissioned by high tech brands alike Sonos commissioning Soft Lab for its majestic piece ‘Light house’)… When Bloomberg, the empire of business and market news, deploys ghostly Darren Almond’s multimedia installation ‘In the Shadow of Words’ in its Bloomberg Space — plunged in black… When David Byrne uses words to denounce the inauthenticity of contemporary art: ‘The market and the disparity of wealth taints everything’, the doctrinaire castles tremble, sealed borders blur, and the traditional points of reference alter.

When Abounaddara, a collective of Syrian filmmakers, is taking incredible risks to reveal the atrocities taking place in their country through alternative documentaries, ‘Reality is the new fiction’ — a space where authored and engaged journalism, or ‘emergency cinema’, are expressing. More and more, it is for the artists to stand up against absurd regimes, gender inequality, and human rights abuses.

We are post-modern post-ironic creatures surfing on the 20th century ashes with a brain system irradiated by culturally intertwined references. That is how we build our sentences, how we construct games and role play, how we revolt against injustices, and why we still fall for ‘beautiful losers’.

In 1991, Nirvana’s ‘Smell Like Teen Spirit’ released post-adolescent rebellion: ‘Load up on guns and / Bring your friends /It’s fun to lose’, two decades later, electronic songwriter Moby echoes, blogging about his escape from New York to LA because ‘creativity requires the freedom to fail’ and ‘Los Angeles captures that strange, exciting and at times delusional American notion of magical self-invention’…

We have entered an era of romantic tech convergence and effortless cross-pollination, a place for ‘fablabs’ to innovate, an era for artists to scan the world with radical thinking and political rebellion; an era designed for endless exploration — with the right to fail and to start all over again.

At the confluence of art and technology, through installations, debates and workshops, Convergence 2015 will underscore artistic achievement in the interplay of art forms that are evolving as one.